If you had to pick a single word to describe everything that was happening in 1924, “innovation” would certainly come to mind pretty immediately.

In February, Calvin Coolidge became the first President of the United States to record and deliver a radio broadcast right from the grounds of the White House. On the opposite coast, Metro Goldwyn Mayer was formed – a then-little movie studio that would quickly become the giant MGM. Not only was it the year that first gave us the Macy’s Thanksgiving Day Parade, but it was also the period where we were given one of the greatest pieces of music ever recorded – Rhapsody in Blue, by George Gershwin.

Regardless of how you choose to look at it, 1924 was a year for the record books. So why, then, should you expect the lumber industry to be any different.

In this section, you will continue to learn about this critical stage in grade-marking, which was still in the process of being established with the consuming trade. You will learn about the controversy seen as this issue continued to develop – as some wholesalers and retailers approved of the action, while others did not. You will also find out more information about the indirect benefits to the manufacturer that were quickly turned into direct financial rewards – namely by way of increased profits and the higher plane of selling services acquired. We hope that you will continue to find this ongoing story of an industry that left its indelible mark on the country as a whole fascinating and insightful.

Although the grade-marking of southern pine was declared favorable in principle by then Southern Pine Association in March 1922, and machines, both large and small-sized units, had been obtained to accomplish the work on a satisfactory cost basis, it currently appeared that acceptance of the collective action had embraced individual reservations to the point of delaying or postponing inception of the activity as a part of the manufacturing process. Possibly regarded as a novelty, and possibly regarded as too great or an unnecessary expense, grade-marking did not receive full subscriber support.

Further experimentation accomplished grade-marking for less cost, by hand marking. This was tried by the Luther & Moore Lumber Company during 1924 and found to be a success. A one-man job with simple rubber stamps and an ink pad, each item of lumber received his approval and was stamped by his handwork with the grade ruled for the piece, at a cost of 2¢ per M, considered subject to reduction in cost to 1 1⁄2¢ per M with acquired efficiency in the doing.

One man marking, and evidence of his approval that the grade determination for the piece was proper, improved the quality, care, and morals of the workers. The effect of the grade-mark and the coincident fact that lumber grading received duplicate attention, instilled pride and authority in the application of the grading rules. Once graded and stamped the lumber items stood on their own merits and the grader knew that they had to be in line with official grade rules or he would, sooner or later, be reprimanded. Better trimming was necessary – more attention to equipment especially saws resulted – employee interest was automatically stimulated.

Grade-marking was in the process of being established with the consuming trade. Some wholesalers and retailers approved – others did not. In the former case, constructive salesmanship was being adhered to – in the latter, grade juggling was being attacked and controlled, reducing illegitimate handling and unwarranted profit. It had been demonstrated by the mills already grade-marking their lumber that the trade was receptive, reluctantly on the part of some as compared to others, but to be expected in this as any other new venture; and, that of the two methods (1) machine marking, and (2) hand marking, one or the other was applicable to all and any size mill unit manufacturing southern pine.

Of indirect benefit to the manufacturer and in turn converting these benefits into direct financial rewards and profits, was the higher plane of selling service acquired, and the satisfaction that arises with progress. Grade-marking was a simple operation – the smallest mill could do it – the cost was small and the profit great, directly or indirectly. The urge of the industry was to proceed – the delay in factual accomplishment appeared to be the seasoning process of a new idea. 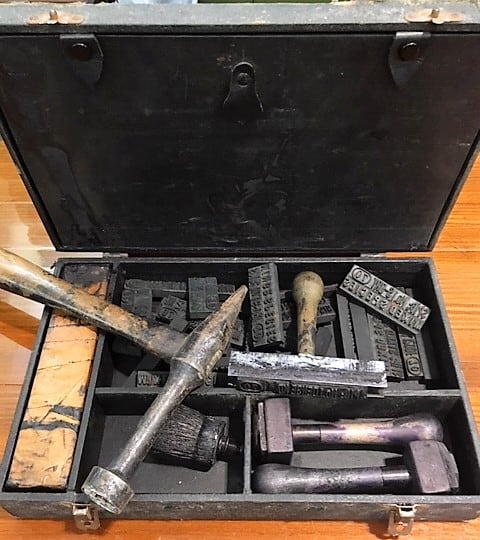 …the report of the Grade Marking Committee of the Southern Pine Association demonstrates practicability and economy in grade-marking the product of subscribers by hand, it is the recommendation of this

1. That we recommend to the subscribers to the Southern Pine Association that they begin to grade-mark their product immediately.

2. That we recommend to the subscribers to the Association that they pay an assessment of three cents (3¢) per thousand feet on their shipments for six months or less, beginning March 1, 1925, for the purpose of introducing and advertising grade-marked lumber to the consuming public and to all branches of the building industry.

The above recommendation was voted in the affirmative by the Subscribers in official meeting. Sub-standard lumber was discussed and officially condemned. Seventh among the recommended American Lumber Standards reported to the U.S.

Department of Commerce by the Central Committee on Lumber Standards at the March meeting was grade-marking. This reads:

45. That the principle of grade-marking of lumber is approved.

46. That on lumber when grade-marked:

(a) The grade be marked on lumber of grades equivalent to No. 2 Common and better grades, and that on lower grades the grade-mark be optional.

(b) If marked at all, all pieces of a given grade be grade-marked (except that unavoidable mechanical skips are of course allowed).

(c) An easily branded mark or insignia, copyrighted, and nationally uniform, be used in connection with the grade-mark and be available to identify shipments, from all mills, of lumber manufactured in accordance with American Lumber Standards.

(d) An appropriate mark symbolizing American Lumber Standards be copyrighted, and its use be available to those mills which shall have agreed to maintain the agreed standards of size and grade and to submit their lumber product upon complaint to official association inspection.

55. That cards be placed in cars of lumber at mill of origin, showing piece tally by grades and sizes, provided that wholesale dealer, or other buyer or shipper, may by arrangement with mill of origin provide for use, for this purpose, of wholesaler’s or buyer’s or shipper’s car card; provided in such case, that amid wholesaler, buyer, or shipper whose name appears on card is financially responsible for the correctness of the tally as shown on such car card; and provided that this shall not be construed as relieving the manufacturer from his responsibility, if any, to such wholesaler, buyer or shipper.

56. That the grades thus required to be entered on tally card be the official association grades as defined in published grading rules; provided that this requirement is not construed as prohibiting the entry on tally cards of special grades, but that such entry is not recognized under American Lumber Standards.

57. That the American Lumber Standards to be understood as not applying to “special” grades (i.e., not recognized in published grading rules) whether entered on tally cards or not.

The fourteenth of the recommended American Lumber Standards was inspection service.

67. That the formulation of regulations for the conduct of inspection to secure the application of the grading rules published by lumber associations, and the administration, supervision and conduct of inspection service, be exclusively by the lumber industry, and/or lumber consumers (i.e., by the agencies of the lumber trade, and/or lumber consumers, and not by or under the authority, auspices or direction of any government agency or agencies).

68. That nationally administered association lumber inspection, in the sense of a national service to replace the existing services of regional and other associations, is not now practicable.

69. That each association shall undertake to reinspect lumber for its members, and for nonmembers upon request.

70. That all grading shall be done by properly supervised and qualified graders or inspectors.

72. That where buyers demand, and will pay the cost thereof, a certificate made by a certified association inspector shall be furnished with each shipment so arranged for.

73. That upon receipt of complaint from the purchaser, the seller shall immediately request the association under whose rules shipment has been made to provide official reinspection or remeasurement, as the case may be, according to its Inspection Rules in effect at the time of execution of contract; and that the purchaser shall lend all reasonable assistance to facilitate the reinspection or remeasurement.

74. That the expense of such reinspection or remeasurement may be divided between the buyer and seller, or may be borne by either, according to agreement between them, but the person calling for the reinspection shall be responsible to the association for the costs thereof.

76. That each manufacturer association, publishing yard lumber grading rules and conducting inspection service, shall furnish to such central bureau, complete information descriptive of the plan of operation, and continuous regular reports, of its inspection department.

77. That in order to simplify, coordinate, and so far as practicable unify, the methods of inspection, each such association shall be furnished by such central bureau, the plan of operation and the record of performance of the inspection service of each other association.

78. That, in pursuance of national responsibility of the lumber industry for the maintenance of agreed American Lumber Standards, if, after original association inspection, reinspection, and if necessary after reinspection, a report thereon of the chief inspector, any complaint involving agreed and published standards of lumber size, or grade or inspection, shall not have been settled, the National Lumber Manufacturers Association, by agreement or upon request, will represent the manufacturing shipper in arrangement for arbitration.

80. That American Lumber Standards be construed to include standards of size, standards of grade, and agreement to submit to official association inspection, and thereafter, if unsettled, to arbitration, any complaint involving either standard size or standard grade.

These additional items – 45 to 80 inclusive – completed the original draft of Simplified Practice recommendations on Lumber and became effective July 1, 1924, subject to regular annual revision by similar conference, by approval of Herbert Hoover, Secretary of Commerce, U. S. Department of Commerce.

Grade-marking was official, first by Southern Pine Association adoption, and second, by American Lumber Standards action. Adoption, generally, by all lumber manufacturers in position to guarantee their grade, then became desirable.