Maybe the most notable event in terms of the United States in 1931 happened just a few days into the new year.

In January, the American Federation of Labor’s National Committee for Modification of the Volstead Act was formed with a singular purpose: end Prohibition in the United States. At the same time, Thomas Edison was submitting his last patent application to the United States Patent Office – marking a true end to an era in more ways than one.

In this section, you will also learn more about the wide range of different changes that took place in the lumber industry over the course of the year. You’ll find out about how an inspection service for trusted material was inaugurated by the Southern Pine Association – all in the name of improving the quality of products and extending the use of those better materials into a wider range of different markets.

You will learn about how wood preservers and buyers of treated stocks alike were consulted in the wake of the new standardization of wood treatments, which itself added to the benefits of uniform stocks. We will also go into greater detail about the importance of grade-marked lumber for oil derrick use – something that was re-emphasized over the course of the year.

We hope that you will continue to find it as enlightening as it was meant to be, acting as another step on the long journey the industry took to get from where it started to where it exists today.

Prompted by the indication that the inclusion of grade-marked lumber, as a requirement, in the building code of the City of Boston and environs again demonstrated and reaffirmed the upward trend of demand for better lumber, the Southern Pine Association extended the availability of its services and facilities, in the interests of grade-marked lumber production, to nonsubscriber mills or manufacturers. $20 a day and expenses plus $1 per M board feet was the cost and charge for official SPA inspection. To assure an adequate supply of grade-marked and species-marked southern pine lumber whenever any federal, state or municipal government made grade-marking mandatory, or when any large commercial organization or public utility invoked the grade-marking requirement, the Southern Pine Association was properly authorized and equipped to make any necessary arrangements for the particular or specific case.

An inspection service for trusted material was inaugurated by SPA – to improve the product and extend, marketwide, the use of these better materials. Wood preservers and buyers of their treated stocks were consulted in the light of standardized wood treatments and the added benefits of uniform stocks.

The importance of grade-marked lumber for oil derrick use was reemphasized. Shortleaf should be marked “shortleaf,” and longleaf marked “longleaf” – merchandising should identify the specific product. 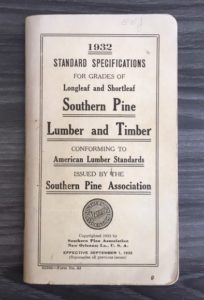 Three years, 1929, 1930 and 1931, of steadily decreasing revenues necessitated adjustments by the lumber industry to changed and distressful conditions. Product standardization and the supporting elements of lumber grading and inspections were fundamental ingredients. They endured – in their absence, the entire merchandising structure of the lumber industry would be competing against itself.

The grade-marking of lumber, early considered in the life of the Southern Pine Association and made effective for southern pine in 1925 – introduced to the public, specifiers, and retailers, during 1925, 1926 and 1927 – was basically established. In territories where grade substitution was most prevalent, and grade-marking most opposed, downtrends of lumber quality and value were arrested by the support given to the grade-marking movement. It was the only basis upon which the lumber industry, both manufacturing and distributing phases, could be intelligently conducted.

Certified lumber was in demand. Grade-marking and species-marking continued to be most important of the organized activities for the promotion of quality lumber. A joint plan of the southern pine industry for general adoption and specification in consuming markets, for a “quality plan” of lumber merchandising, was sought by outside interests. The Southern Pine Association through its subscribers were anxious and ready to promote this character of the product. Grade-marked lumber identified quality; the plan embraced promotion work to increase the use of certified lumber.

The Kendall Bill was introduced into Congress.