1934 marked something of a turning point for the United States, even though it was still recovering from the devastating effects of the Great Depression.

Maybe the event that perfectly symbolizes this change is the release of Frank Capra’s classic film “It Happened One Night.” Starring Clark Gable and Claudette Colbert, it became an instant hit and is considered by many film aficionados to be the first of Capra’s great, optimistic, sentimental screen classics – all during a time when all of those qualities were desperately needed. It would go on to win not only Best Actor and Best Actress at the Academy Awards, but Best Director and Best Picture as well.

At the same time, 1934 was also a period of uncertainty (and, some might say, trouble) for the industry – and for the Lumber Code Authority in general. Grade marking was seen as an incredibly important subject, for example, but it was fully submerged in code difficulties at the time.

The code itself was seen by many as equal parts unfair and destructive, thanks in no small part to the lack of uniformity of compliance. Legal enforceability was sought through the courts, which opened up its own new category of troubles moving forward.

Minimum prices were suspended. Production control was emphasized in the worst possible way. The lumber code itself was seen as “unsatisfactory” to say the least, all of which combined to form a perfect storm that is absolutely worth learning more about.

In this chapter, you will do exactly that – and we hope you find it enlightening.

Grade marking – regarded as an important subject, but submerged in Code difficulties.

Code – unfair and destructive, because of no uniformity of compliance – legal enforceability was sought through the Courts.

The southern pine division of industry administered by the Southern Pine Association, under the Code of Fair Competition, impacted – 10,000 persons or manufacturers; 80,000 to 100,000 employees pertinently engaged; thousands of distributors, wholesalers, and retailers handling the manufactured products – and all subject to Code jurisdiction or affected by its provisions. A monumental task and a gigantic problem – impartially attended, correctly analyzed, solved, and properly applied by the Southern Pine Association – industry’s vehicle for industrial leadership.

The Lumber Code Authority in session at Washington D.C. on January 29 considered – appeals, proposals for the creation of new divisions and subdivisions, code amendments, trade promotion, conversation and sustained yield of forests, the grade marking, and branding of lumber, prevention of the erection of new mills, cost protection prices and export markets.

An amendment to the Code submitted to NRA authorized assessment by the Code Authority of additional code fees not to exceed 5¢ per M or its equivalent for national trade promotion purposes – to acquaint the public with the merits of wood as a housing material, and stimulate building activities for the absorption of unemployed labor.

The Lumber Code Authority provided for the future marking of lumber and timber products to indicate plainly the grade, size, species, source of manufacture, and whether seasoned or unseasoned.

The increased demand for grade marked lumber and the intention of the NRA to enforce the branding or marking of timber products necessitated a greatly enlarged SPA inspection service. Already well equipped to handle inspections prerequisite and after actual grade marking practice by any mill, the Southern Pine Association, despite the educational program conducted in behalf of grade marking by SPA over years, found the peculiar situation that many mills in the southern pine industry were disposed to regard the SPA grade mark as a badge of membership to the Southern Pine Association. This, is only an assumption for individual manufacturer’s convenience, was, of course, not true. The SPA grade mark was permitted to mills only after the particular mill graders had qualified through a routine designed for competency to the point that the SPA grade mark guaranteed to the consuming public that grade marked lumber, piece by piece, was of the grade purported. 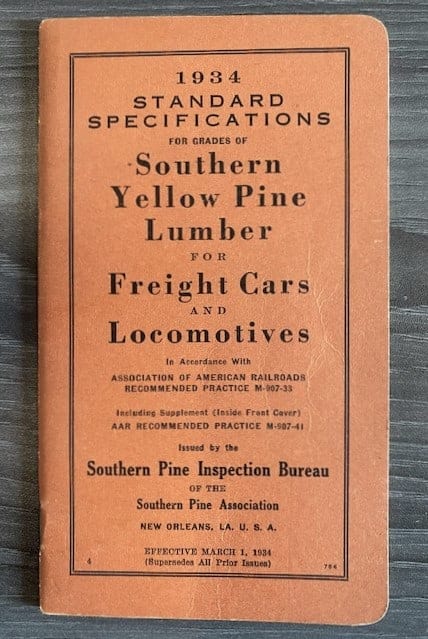 Free schools, organized, supervised and instructor equipped by the Southern Pine Association, were conducted by an official SPA grade inspector – to give graders at the different mills a better knowledge of southern pine grading rules. All southern pine lumber sold or shipped was destined, ultimately, to be stamped with the SPA grade mark – because of Lumber Code Authority regulations – and before SPA would furnish the license and stamps to any mill, the mill must have in its employ at least one grader who had qualified by proving his ability at grading lumber by passing three tests or examinations with a rating of not less than an average of 95%.

The National Forest Conservation Conference composed of public and private forest agencies was formulated in conjunction with the Lumber Code.

The Domestic Origins Act came into being during 1934.