The Southern Pine Association was formed in 1915 to provide a common set of grading standards for the industry. Prior to the formation of the SPA, each regional pine association published their own grading rules using different grades and sizes. With the advent of World War I, the Department of Commerce required standardization of lumber sizes and moisture specification, and the SPA was instrumental in leading this industry transition. In 1941, as courts sought to separate inspection and grading services from trade associations, the Southern Pine Inspection Bureau was created as a non-profit organization with an elected Board of Governors. SPIB incorporated in Louisiana in 1969 and since 1993 has been incorporated under Florida law. All grading rules for Southern Pine are maintained by SPIB and are the standards for the entire Southern Pine industry.

The American Lumber Standard Committee (ALSC) Board of Review verifies that the lumber grading rules conform to the American Softwood Lumber Standard, PS-20. The ALSC and its Board of Review are charged with establishing, maintaining, implementing, and enforcing this standard. From the preface of PS-20, “Through a consensus process, the ALSC maintains the Standard and establishes policies and adopts other standards by which the Board certifies grading rules, approves design values, accredits agencies to grade and inspect under those rules and monitors the agencies’ performance. The purpose of this standardization program for manufacturers, distributors, users, and consumers is to provide for the correct grade mark labeling of lumber by mills using the service of an accredited agency.” Furthermore, “A separate consensus body, the National Grading Rule Committee (NGRC) is established to develop and maintain nomenclature and descriptions of grades for dimension lumber that conform to this Standard. This Standard applies to domestic production consumed in and exported from the United States, and for lumber imported into the United States.” 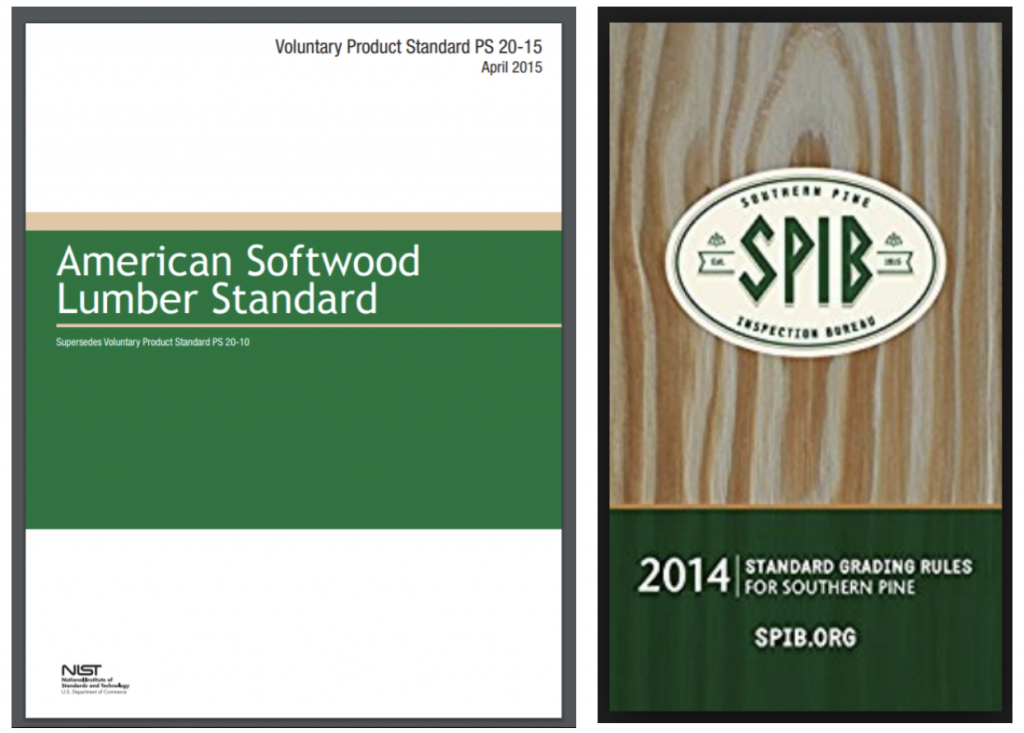 Who can provide inspection services for lumber?

While only six agencies are accredited to write lumber grading rules, the ALSC currently has 28 accredited independent third-party agencies headquartered throughout the United States and Canada. Current operations of these agencies extend to approximately 900 mills and 1000 heat treat operations in over 15 different countries. US accredited lumber inspection agencies are listed in the following table:

There are additional agencies accredited to provide heat treatment service only.

Inspection agencies must become accredited to inspect lumber under all of the lumber grading rules for species for which they intend to provide services.

The National Grading Rule Committee has written the National Grading Rule which specifies characteristics permitted in certain grades of visually graded lumber, such as Select Structural, #1, #2, and #3. These rules and characteristics are required to be the same across all species of lumber. The original intent was so that a #2 2×4 would have similar characteristics, regardless of the species. In reality, a #2 2×4 does not have the same appearance across species, because different tree species grow differently. For example, spruce trees tend to have smaller knots than certain pine species. So while the species have the same size maximum permitted knot, you may or may not see maximum sized knots in a particular species of lumber.

For lumber produced outside of the National Grading Rule (other sizes and/or grades of lumber), the rules for each species may vary by species.

SPIB’s Role in the Lumber Industry

The Southern Pine Inspection Bureau plays an integral part in supporting the softwood lumber industry. By maintaining exact product quality standards, SPIB inspires confidence among manufacturers, buyers, and consumers, which benefits the industry as a whole. However, SPIB is more than an inspection agency and offers a wide program of standardization of grading and manufacturing practices. SPIB is committed to working with our customers to establish the highest standards and ensure a sustainable, successful future for the industry.